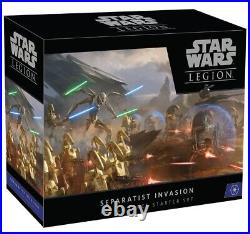 Star Wars Legion Separatist Invasion Force on 9/16 Pre Order. A mighty Separatist Invasion force is your players to command with this new Battle Force pack for Star Wars: Legion Led by the nefarious General Grievous, this pack puts the wide variety of Separatist battle droids and heavy vehicles at players disposal, including three units of B1 Battle Droids, two units of Droidekas, an AAT Trade Federation Battle Tank, and a unit of IG-100 MagnaGuards.

Accompanying these units are three new Command Cards for use exclusively by the Invasion Force as well as reprints of General Grievous three Command Cards and copies of the four generic Command Cards. Finally, a set of 31 reprinted upgrade cards gives players everything they need to customize their Invasion Force and conquer systems across the galaxy. As serious gaming enthusiasts ourselves we understand the value in getting the products you need quickly, so you can spend more time enjoying your hobby and less time waiting for it to show up. This item is in the category "Toys & Hobbies\Games\Miniatures, War Games\Star Wars\Other Star Wars Mini Games". The seller is "hobby-titan" and is located in this country: US.