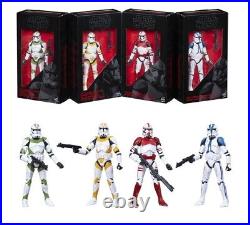 Star Wars Black Series Clone Trooper Order 66 4-pack 6 Action Figures [BIB]. Figures are ex-display and back in box, Excellent condition comes with all accessories. Some slight shelfware on the art box, minor dings and dints Re-create the biggest battles and missions of the Star Wars saga with these figures from The Black Series!

These lean mean green biological fighting machines were sent to crush the Trade Federation stronghold during the final hours of the Clone Wars. Shock Trooper - The Emperor's squad! Charged with keeping Coruscant and the Emperor safe, these red-clad troopers are ready to help, and also mow down opposition to Palpatine's New Or­der.

Suitable for ages 4 & up WARNING: CHOKING HAZARD - Small parts. Not for children under 3 years. Please read our Frequently Asked Questions. We send our order using the reliable Australia Post, ensuring your items arrive quickly and safely.

Payments can be made using one of the following methods. In the unlikely event that an item is found to have manufacturing faults, or has been incorrectly sent, we will gladly replace it. This way we know that you have received your item safely. Feel safe purchasing from a 100% Australian owned and operated business. Operating since 2000, our unwaivering mission has always been to please our customers with our wide range of products and fast turn around times.