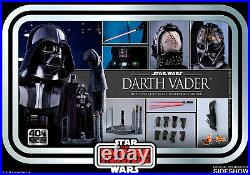 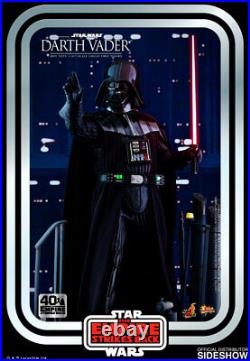 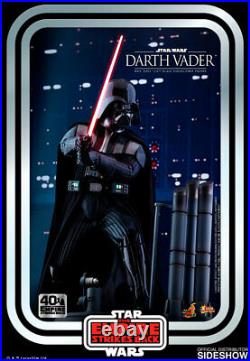 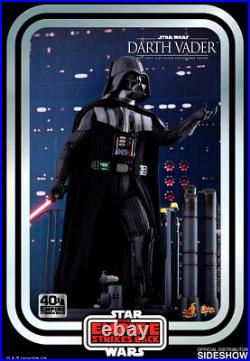 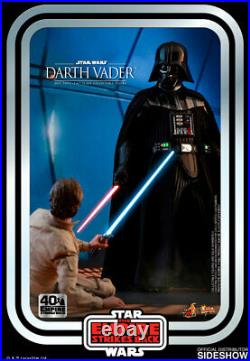 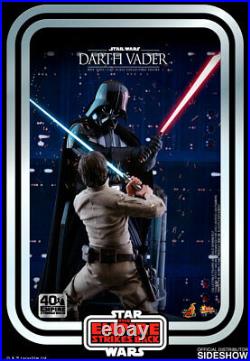 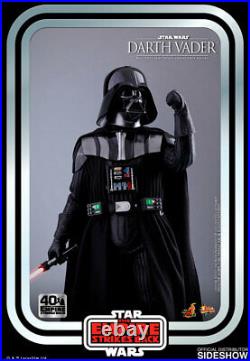 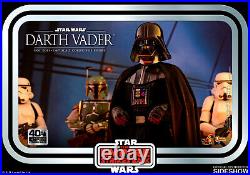 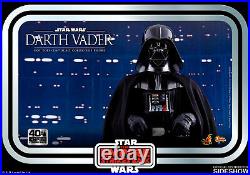 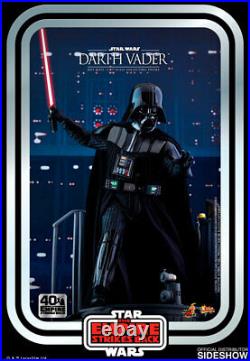 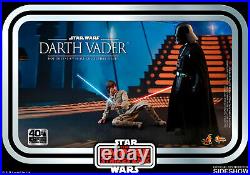 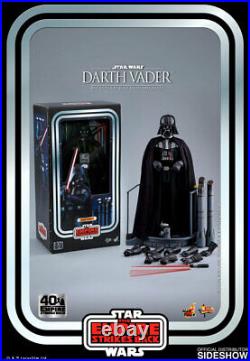 Hot Toys Star Wars EMPIRE STRIKES BACK 40th Anniv. Darth Vader 1/6 PRE ORDER. In Star Wars: The Empire Strikes Back, Darth Vader attempted to convert Luke Skywalker to the dark side by luring the young Skywalker into a trap in the Cloud City of Bespin. In the midst of a fierce lightsaber duel with the Sith Lord, Luke faces the startling revelation that the evil Vader is in fact his father, Anakin Skywalker. In celebrating Star Wars: The Empire Strikes Back 40th anniversary, Hot Toys is excited to introduce a series of throwback collectibles based on this iconic film! Sideshow and Hot Toys are pleased to re-introduce the highly popular sixth scale Darth Vader Collectible Figure with a specially designed retro-style packaging! The highly-accurate collectible figure features a skillfully crafted Darth Vader helmet with complex interior mechanical details and the back of Lord Vaders battle-damaged head, highly detailed Darth Vader armor and sophisticatedly tailored bodysuit, LED light-up chest panel and belt, an LED light-up lightsaber, and a Cloud City themed diorama figure base! Embrace the 40 year legacy of this cinematic masterpiece and dont miss out on this stunning Darth Vader collectible figure for your The Empire Strikes Back 40th Anniversary Collection! Hong (Head Paint) (Head Art Direction). WHAT'S IN THE BOX? The Darth Vader Sixth Scale Figure specially features. An authentic and detailed likeness of Darth Vader in Star Wars: Episode V The Empire Strikes Back. Specially crafted helmet with a detachable outer helmet to reveal the back of Darth Vaders battle damaged head.

Specialized body with over 30 points of articulation. Nine (9) interchangeable gloved hands including.

Size and weight are approximate values. Comic Grading - Comic Buyers Only. Comic Book Grading is very subjective, but we adhere to the Overstreet Price Guidelines for grading and determining the value of comics. Here is a very brief breakdown. NEAR MINT: Straight from the press to the shelves.

Covers as pristine as possibles with oh so subtle dings. VERY FINE: Close to a Near Mint comic. Covers are shiny and smooth.

No creases or folds should be present anywhere on the cover or pages. FINE: Average condition of your typical back issue comic. Cover gloss and colors should be intact with only minor spine rolls or corner creases present. Blemishes, dings, dents, and other impact/usage disfigurements can be present, but should be minimal on the area of the central image of the book?

Pages are reasonably close to their original color. Relative wear due to age and how it's been handled. Interior page are intact with reasonable amount of discoloration from age/exposure. GOOD: This is essentially a reader's copy.

Cover is intact, but may be folded, feature tears, creases, wrinkles, and peripheral pen/pencil marks. Nothing about the condition should affect the readability of the book. Please wait for combined invoice before paying.